We work on the development of antivirals attacking ASFV at every stage of its life cycle including virus attachment, internalization, genome multiplication, assembly and release of the progeny virus. Such antivirals may directly inhibit ASFV infection through targeting the viral and/or cellular components involved in the viral cycle. Our present activity focuses on the following projects:

Project #1: Flavonoids and their chemical derivatives

Flavonoids are a large group of plant secondary metabolites found in fruits, vegetables, nuts, seeds, as well as in red wine and tea. Due to their high availability and low side effects, flavonoids and their derivatives have been the center of attention among researchers related with antiviral drug development.

By screening in cell based assay, we showed (Hakobyan et al., 2016) that two flavonoids, apigenin and genistein have a significant anti-ASFV activity. Apigenin belongs to the flavone structural class and chemically known as 4', 5, 7,-trihydroxyflavone. In nature apigenin is abundantly found in many plants, especially in parsley, celery and chamomil. We found that pure apigenin inhibited ASFV BA71V strain infection in vitro. Apigenin at 50 uM concentration reduced the viral yield by 1000 times (99.99% inhibition). Our further experiments revealed that apigenin can inhibit the production of ASFV proteins, as well as the formation of viral factories.

However, chemically pure apigenin used in our study is highly unstable and practically insoluble in highly polar solvents such as water. Therefore, apigenin in plants occurs typically in derivative forms such as apigenin glycosides, where apigenin is linked to a sugar moiety, or methylated apigenin. Now we study the antiviral effect of methylated apigenin and apigenin glycosides on ASFV infection. We investigate their antiviral activity using non-virulent ASFV BA71V strain adapted to grow in Vero cell culture and virulent ASFV Arm-07 isolate (genotype II) nowadays circulating in Eastern Europe.

Genistein also possesses some antiviral activity against ASFV. We have found that genistein inhibits ASFV infection by disrupting viral DNA synthesis. Some evidences suggest that genistein may stabilize the complex between cellular topoisomerase II and DNA, thereby inducing topo II-mediated double-stranded breakage. We have found the presence of fragmented ASFV genomes in cells exposed to genistein, suggesting that this molecule also acts as an ASFV-topo II poison. Molecular docking studies have demonstrated that genistein may interact with four residues of the ATP-binding site of ASFV-topo II (Asn-144, Val-146, Gly-147 and Leu-148), showing more binding affinity (-4.62 kcal/mol) than ATP4- (-3.02 kcal/mol). These results indicate that viral topo II can be a good target for drug development against ASFV.

This project is being conducted in collaboration with Prof. Rouben Aroutiounian from Yerevan State University and Prof. Karen Nazaryan from the Institute of Molecular Biology. 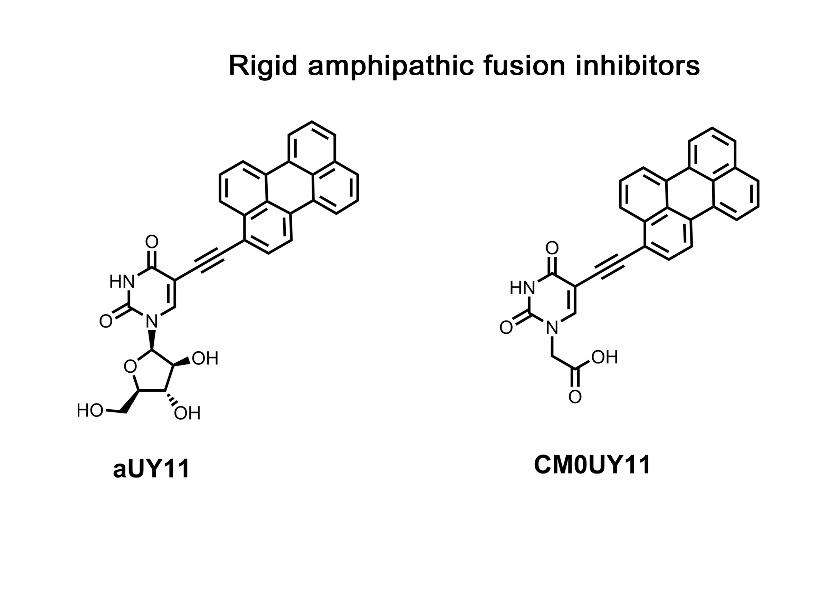 Rigid amphipathic fusion inhibitors (RAFIs) are nucleoside derivatives with antiviral activity against different enveloped viruses. RAFIs have been shown to suppress the infectivity of human viruses such as herpes simplex virus 1 and 2, hepatitis C virus and some other enveloped but unrelated viruses (St Vincent et al., 2010; Colpitts et al., 2013). These nucleoside derivatives exert their antiviral effect through biophysical mechanisms. They target virion envelope lipids and inhibit the formation of the negative curvature necessary for the hemifusion stalk, an essential step in the fusion of viral and cellular membranes during the viral entry (St Vincent et al., 2010). For the first time, we study the antiviral effect of several RAFIs in order to identify the most potent nucleoside derivatives targeting the ASFV entry. Our preliminary results indicate that some RAFIs are able to reduce the viral yield up to 1000-fold, when they are added during the attachment or internalization stages. Further antiviral characteristics, including classical nucleosidic mechanisms are now studied. This project is being conducted in collaboration with Dr. Vladimir Korshun from the Institute of Bioorganic Chemistry of the Russian Academy of Sciences.

Recently, we begin a new project on the development and testing of nanocomplexes consisting of SiO2 nanoparticles and phosphorylated nucleoside or oligonucleotide analogues against ASFV infection. We study azidothymidine, lamivudine and (S)-HPMPA since their antiviral activity against other viruses has been demonstrated. In contrast to other studies, we use phosphorylated nucleosides. To increase their intracellular accumulation, we immobilize these compounds onto SiO2 particles (Vasilyeva et al., 2013). It was shown that SiO2 particles of 40-70 nm in size penetrate into the cells and their nuclei and therefore they can act as delivery system for different compounds, including nucleoside analogues and oligonucleotides. We design antisense oligonucleotides targeting the mRNA of ASFV p72 protein. We use phosphoryl guanidine oligonucleotides, a new class of nucleic acid analogues in which the natural negatively charged phosphate groups are replaced with charge-neutral phosphoryl guanidine groups. Preliminary studies have shown that these oligonucleotides possess physico-chemical and biological properties suitable for therapeutic application and they show high resistance enzymes, which break down phosphodiester bonds (Prokhorova et al., 2017). This project is being conducted in collaboration with Dr. Dmitry Stetsenko.

The Institute of Molecular Biology (IMB)

The Institute of Molecular Biology (IMB) of the National Academy of Sciences of the Republic of Armenia (NAS RA) was founded in 1966 to encourage the development of molecular biology in Armenia. Today IMB has 18 research units (11 laboratories and 7 groups), and 3 educational units. Current research activities of IMB are focused on investigation of regulatory mechanisms of cell activity and its alterations in a number of pathologic conditions including autoimmune, autoinflammatory, cerebrovascular, infectious, oncological, and psychiatric disorders. The research, conducting in vivo, in vitro, in situ and in silico, includes human, animal, cell-cultures and computation modeling studies on genetic, protein, cellular, membrane, and sub-cellular levels.